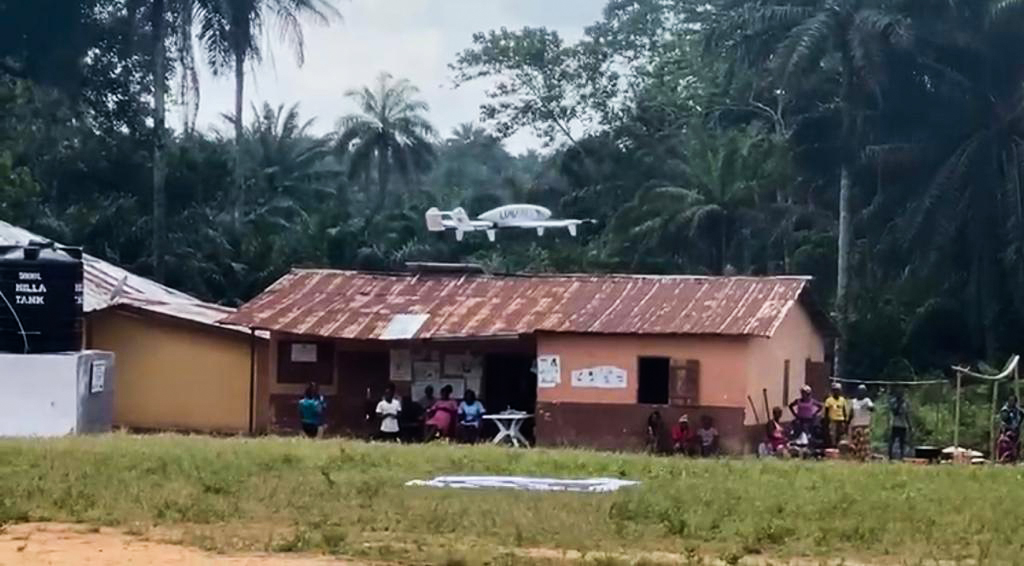 On 19th November, the Directorate of Science Technology & Innovation (DSTI) celebrated the first delivery of medicines by drone in Sierra Leone.  The drone delivery was completed by UK-based UAVaid as part of the MDDP project to improve access to medicines in remote parts of the country.  The delivery was conducted to test and demonstrate the use-case of the Medical Drone Delivery Project (MDDP) at the Mabang Community Health Post in Sierra Leone’s Moyamba District, with funding from the Bill & Melinda Gates Foundation, partnered with The Ministry of Health and Sanitation (MoHS), and Crown Agents.

The maiden flight from Rotifunk village to Mabang MCHP took just 13 minutes, a journey which normally takes 2 hours via vehicle, and was celebrated by the local community. In attendance were dignitaries and ministers, including the CIO of Sierra Leone, Dr.Sengeh, who explained the role of innovation and technology in improving access to medicines.  The event also brought together officials from The Ministry of Health and agencies including the National Medical Supplies Agency, Ministry of Basic and Senior Education, Ministry of Environment, Ministry of Fisheries, UNICEF, and other development partners and community stakeholders.

David Manley, MDDP Project-Lead at DSTI, explained that initially, the MDDP project would focus on improving medicine deliveries to 250 Community Health Centers (CHCs) and hospitals nationwide, and there are plans to expand this to other health posts, significantly improving access to medicines for communities in remote and hard to reach areas of Sierra Leone. He added, “Specifically, in addition to contributing to the reduction of maternal-related deaths, the use of drones presents the possibility of numerous cross-sectoral use-cases and fosters informed decision-making at the highest levels of government.”

Daniel Ronen, co-founder of UAVAid, said “We are extremely proud to be partnering with the government of Sierra Leone on such an important project and helping to improve the healthcare systems of the nation.  The use of drones helps overcome the numerous transport and data gathering challenges inherent in operating in such complex contexts.”  UAVaid was selected as the preferred drone supplier following a rigorous and transparent selection process from over 30 international companies.

Dr. Lawrence Sandi, Managing Director of the NMSA, whose agency’s mandate is to procure, warehouse, and distribute drugs and medical supplies nationwide said “We are pleased to collaborate with DSTI in bringing this landmark medical intervention to actuality. We are making good progress in transforming healthcare in Sierra Leone with undimmed confidence. We salute all partners involved in the incredible hard work invested in this exercise. This is a win for all of us.”

UAV Technical Lead, Rakie Sesay, who also explained that the overall strategy of building a drone ecosystem would encourage cross-sectoral growth across multiple industries including the use of drones in other areas such as agriculture, reforestation, and law enforcement.

The DSTI led Medical Drone Delivery Project (MDDP) is designed to provide improved access of medicines to parts of Sierra Leone traditionally unnavigable for some or all of the year. The MDDP incorporates a rapid dispatch capability into the existing medical supply chain. This dispatch transports 42 of the most essential commodities prioritized by The National Medical Supply Agency (NMSA) to combat maternal and infant mortality.

Making a drastic cut to Sierra Leone’s startling maternal mortality statistics has been high on the presidential agenda since 2018. With 15% of the national budget allocated to increasing access to quality health care services, and a promise to halve maternal mortality rates by 2023, creating a space that supports drone-enabled medical supply chains seems like another step in the right direction.

The Directorate of Science Technology and Innovation (DSTI)

The Directorate of Science, Technology and Innovation (DSTI), uses science, technology and innovation to support the Government of Sierra Leone to deliver on its national development plan effectively and efficiently, and to help transform Sierra Leone into an innovation and entrepreneurship hub.

www.uavaid.com
UAVAid is a UK-based developer and operator of specialist Unmanned Aerial Systems AKA ‘drones’ that are optimised for global development (GD) and humanitarian applications in remote and difficult to reach areas of the developing world.  They operate a mixed fleet of BVLOS drones, including their proprietary multi-role HANSARD, and VTOL aircraft supported by their technical partner SWOOP.