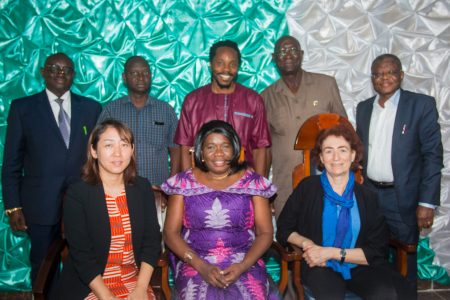 “Since the launch of the MIT-Sierra Leone Program it has been a pleasure to have Njala University as an affiliate of the Jameel World Education Lab (J-WEL) MIT’s higher education initiative,” said Professor Hazel Sive, who is the founding coordinator of MIT-Africa. The MIT-Africa Short Course is a new initiative. It not only focuses on strengthening the link between Njala and MIT, but it creates a bridge between MIT and Sierra Leone’s universities to improve curricula.

Sive is a professor of biological sciences at the Massachusetts Institute of Technology in Cambridge where she also focuses on the evolving role of faculty in teaching and scaling of curriculum reform. She leads the MIT-Sierra Leone Program launched in March this year after a high-level government delegation led by President Julius Maada Bio visited Boston.

“One of the first things President Bio asked us to do at DSTI was to create links between Sierra Leone and world-class institutions globally. So we went to Harvard and MIT because they are the best higher education institutions in the world,” said Dr. Moinina David Sengeh, Chief Innovation Officer, DSTI.

” This unique and historic partnership formed between Sierra Leone and MIT less than six months ago has led to over a dozen bilateral exchanges of talent and resources. These interactions are already leading to several new solutions that will impact the lives of everyday citizens in the entrepreneurial, and education sectors.”

Present were representatives from all public higher education institutions in Sierra Leone including; Ernest Bai Koroma University, Milton Margai, and Kenema Polytechnic. With this course, Njala University opened its doors to share knowledge gained from its affiliation with MIT’s J-WEL. Top on the agenda for educators and government was curricula reform-turn college graduates into entrepreneurial 21st Century problem solvers.

“We hope that the representatives here are not only learning but trying to translate what they have learned by looking at their curricula and trying to incorporate some of these best practices to enhance the capability and the marketability of our products which are the graduates from our institutions,” said Fatmata Kaiwa, the Director of Science & Education at the Ministry of Technical & Higher Education.

The Government of Sierra Leone has committed 21% of the country’s budget to education. The highest on record to date. The focus on education is at every level; pre-primary to tertiary. Also, a human capital development incubator has been launched at State House to further demonstrate the New Direction’s commitment to learning, innovation, and research.

“The World Bank has been working with the Government of Sierra Leone to strengthen the education sector in the country. We are keen to build the foundations for the demanded skills development in the country which will help the country build strong intellectual human capital,” said Dr. Mari Shojo, Senior Education Specialist, Education Global Practice, World Bank.

DSTI and its partners; the World Bank, UNICEF, MIT, national educators and policymakers across all Ministries, Departments, and Agencies are collaborating to develop a national ecosystem to improve learning outcomes from beginning to the end of the education lifecycle. Through academic exchange and research, the MIT-Sierra Leone Program allows educators to learn world-class techniques to make students successful.