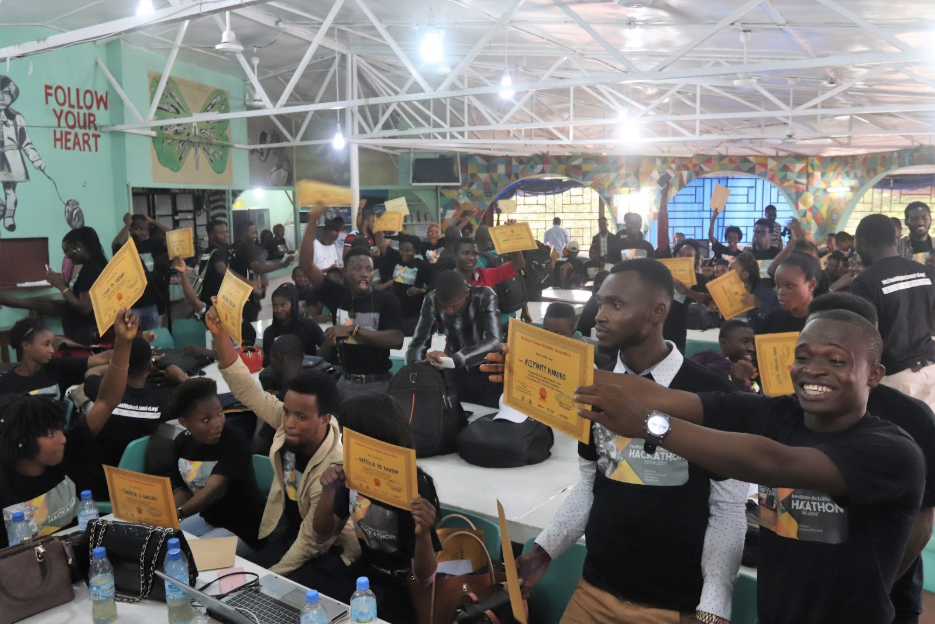 A team of 10 young Sierra Leoneans has won 38 million leones for their innovative mobile payment solution. They met for the first time at the three-day Resilient Urban Mobility Hackathon. The hackathon funded by the World Bank Group was organized by the Ministry of Transport and Aviation, Sierra Leone Road Transport Corporation (SLRTC), and Sensi Tech Hub under the technical leadership of the Directorate of Science, Technology, and Innovation (DSTI). Hackathons are events in which programmers, designers, those involved in computer software development and problem-solvers come together to solve problems with innovative ideas. Contributing to this partnership, were other stakeholders, including local and international experts in urban mobility and planning.

Over 100 first-time and seasoned hackers came together to develop solutions to improve urban mobility (capturing the movement of people in cities using urban transportation systems).

“We are here to create solutions to help facilitate the process of solving a problem around the issues we’re having in moving people and goods across our city,” said Morris Marah, Founder, and Director, Sensi.

“The problems include safe roads, smart parking, disaster management, environment safety, and pollution, all of these things are issues we have at large in our city.”

Marrah’s organization Sensi creates spaces for young people to develop skills for innovation, technology, and entrepreneurship. As the implementing partner Sensi (through the support of DSTI) received a grant of US $48,851,33 from the World Bank to organize the manage the hackathon. The hackathon is part of a drive to create an ecosystem to support the World Bank’s integrated and resilient urban mobility project in Sierra Leone.

Before the hackathon, DSTI in collaboration with the World Bank organized a one-day workshop to train participants on the tools and technologies for processing and analyzing large-scale data from cellular phones often referred to as Call Detail Records (CDRs). Over fifteen participants representing Ministries, Departments and Agencies (MDAs), Sensi Tech and other private sector entities attended the workshop.

Data scientists and software developers from DSTI provided technical support and mentorship to the teams to build prototypes/tools, including guidance on how to improve and scale their prototype during the hackathon.

Their idea for the $4000 prize is SwiftPay. SwiftPay uses Unstructured Supplementary Service Data (USSD) to allow users to make mobile payments to purchase bus tickets. SLRTC told the hackers in its presentation that when bus conductors sell tickets, money comes up short. The ticket sales don’t match the cash that is brought back to SLRTC at the end of the workday. SwiftPay uses USSD because most Sierra Leoneans do not own smartphones and already use the same platform via mobile money. Although Ishmael Kargbo’s team won the hackathon, he felt intimidated when he arrived at the event.

“When I came in on the first day I was afraid seeing developers, innovators, entrepreneurs gathered in one place,” said Kargbo, Group Leader Mobility Hackers.

Sierra Leone needs to develop a dynamic community of innovative and creators to disrupt the status quo with solutions to meet the challenges affecting the nation’s most vulnerable citizens.

“We were the second team to pitch our ideas, and after listening to presentations from the other teams, we were sure that ours was the winning idea and this is because all the other teams had ideas that made sense but was difficult to implement. Ours, on the other hand, was easier to implement and easier to use,” said Kargbo.

The goal of the hackathon was to actively engage the public, especially problem-solvers, as a means of strengthening the entrepreneurial and tech ecosystems.

Kargbo and his team will spend the next three months working under the mentorship of technologists at Sensi Tech and DSTI. There they’ll get administrative, and technical support to develop the prototype for SwiftPay, USSD payment solution.