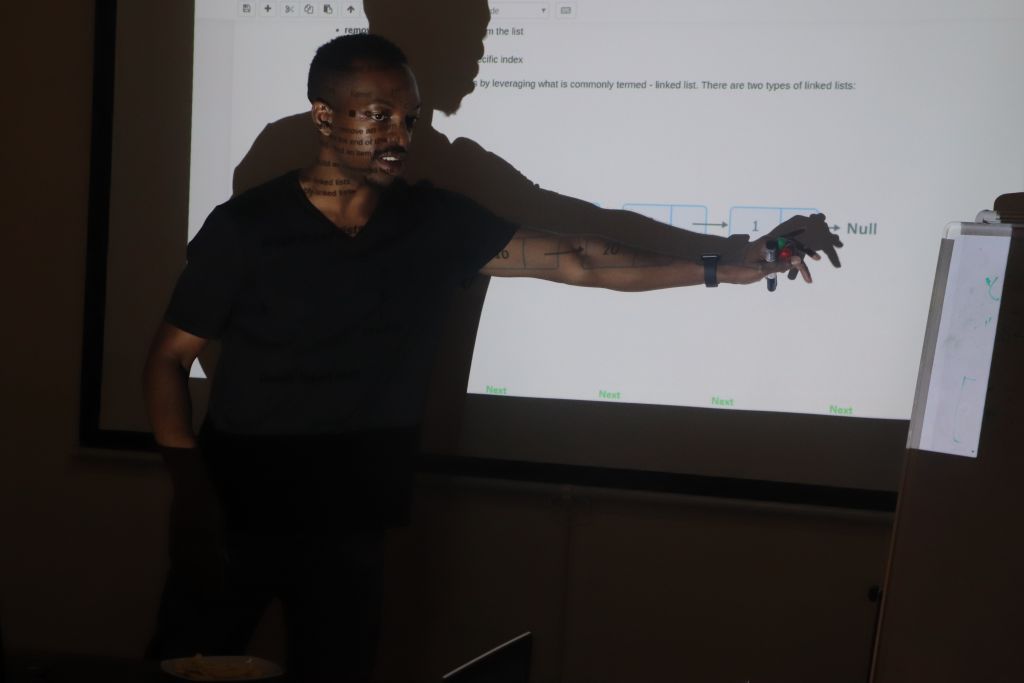 Abdoul-Kader Keita and Patrick Taylor, two West African developers at Facebook in consultation with the Chief Innovation Officer of DSTI, Dr. Moinina David Sengeh, held a two-day hands-on-learning hackathon at the Directorate of Science, Technology, and Innovation on Nov 9-10 in Freetown, Sierra Leone.

Hackathons are events in which programmers, designers, those involved in computer software development, and problem-solvers come together to solve problems with innovative ideas.
Before the hackathon could get underway, participants were taught the basics of data structures, algorithms, and modern web server development with python. Teaching was necessary because very few were able to complete the online test setup to measure participants’ programming skills.

The hackathon brought together 25 young people, including students from Limkokwing, Fourah Bay College, Njala University, and the University of Makeni–most of them first-time developers to solve the problem of student registration at universities. Every year during the first couple weeks of the new semester, thousands of students across Sierra Leone spend hours in queues waiting to register for classes. The hackathon tried to develop alternative ways to register to ease student strain.

“More than one hundred software developers in Sierra Leone took the test, but only 12 were able to pass,” said Mahmoud Javombo, Ecosystem Manager at the Directorate of Science Technology and Innovation. With a population of more than 7 million, that has just 25 developers means that more needs to be done to promote coding skills.

Those who gained entry to participate in the two-day workshop, and hackathon were able to develop the knowledge they needed but did not have to perform the functions required to attempt to solve the problem of registration.

“Technology is not complicated with the right guidance, right structures, everybody can make significant progress in a short time,” said Abdul Kader, an Ivorian software engineer at Facebook.

Mary Sia Konoyema, a third-year student of the Limkokwing University of Creative Technology, said she had learned a lot in these two days.

“I had done two programs, but I just did it out of obligation, but now I know a better way of doing things.”

She said she was introduced to APIs during the workshop, and she learned how to create and work using the API system.

API stands for Application Programming Interface. An API is a software intermediary that allows two applications to talk to each other. In other words, an API is a messenger that delivers your request to the provider that you’re requesting it from and then responds to you.

“Their output was great. We were amazed at the brilliance of students that they gave high-quality output in terms of their progression from day one to day two. This shows that a lot of them were able to pick up a new understanding of the new programming language,” said Kader.

The top 3 performers at the hackathon will intern with DSTI to work with software developers, data engineers, and scientists. The hackathon was the fifth held by DSTI in just 12 months. Hackathons and workshops are part of DSTI’s broader mission to create and transfer knowledge locally to strengthen the local ecosystems for technology and innovation.

Kader and Taylor will head over to Ivory Coast, where they’ll hold the same event for developers there in a bid to get local developers on the continent focused on problem-solving.