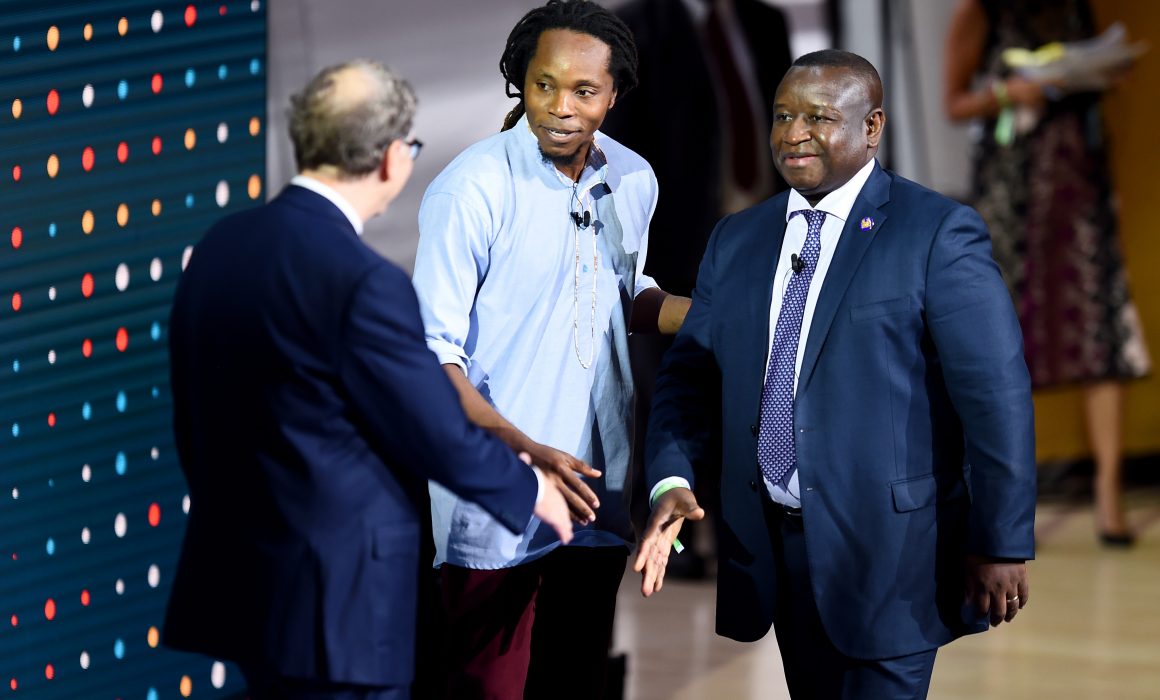 by DSTI MEDIA
President Bio launched an Innovation in Government Incubator in Sierra Leone over the weekend while in South Africa . President Maada Bio was at the Global Citizen Festival in Johannesburg with other world leaders committed to the Sustainable Development Goals. It was there that the nation’s top Goalkeeper reiterated his commitment to human development and innovation. “We have to first rely on ourselves,” said President Bio to a crowd of sixty thousand Global Citizens at the FNB Stadium in Johannesburg.    “By investing our African resources in free, quality teaching and learning, we are investing in our human capital and empowering our youth to be the generation that will end poverty in our time.” President Bio also announced that his government had created an Innovation in Government Incubator within the Directorate of Science, Technology, and Innovation. This new initiative was lauded and welcomed by Mr. Mark Suzman, President, Global Policy and Advocacy at the Gates Foundation on the side lines of the Goalkeepers Africa event.

NEW YORK, NY – SEPTEMBER 26: Bill Gates, David Moinina Sengeh and President of Sierra Leone shake hands onstage during the Goalkeepers 2018 Event, at Jazz at Lincoln Center on September 26, 2018 in New York City. Goalkeepers is a multiyear campaign organized by the Bill and Melinda Gates Foundation dedicated to accelerating progress towards the U.N. Sustainable Development Goals (or Global Goals). The event highlighted the stunning progress in reducing extreme poverty since 1990 and showcased what is possible if the world invests in the health and education of its growing youth populations. PAID COMMERCIAL IMAGE FOR PUBLICITY PURPOSES – FREE FOR EDITORIAL USE.

“We are pleased to support the launch of this project as it is a clear commitment from the government of Sierra Leone to invest in human capital,” said Mr. Suzman. “In prioritizing innovation and human capital, Sierra Leone is in a better position to kick-start its development. This approach can also provide a blueprint for other fast-growing developing countries trying to make the most of their youth boom”. Sierra Leone’s Innovation in Government Incubator (IGI) will be a hub for local start-ups, private, public and academic organizations to collaborate on projects that will help citizens access government services and information more efficiently.  It will also provide an opportunity for young people to participate, innovate and solve challenges in their local communities. “At the Innovation in Government Incubator partners will share data, build models, develop hypotheses and test pilot projects to inform government investments in human capital,” said Dr. Sengeh, Chief Innovation Officer, Directorate of Science, Technology, and Innovation. The ultimate goal of the IGI is to create a space for local talent across all sectors to develop solutions to enhance government service delivery. Technology will give Sierra Leone the edge it needs to accomplish its Sustainable Development Goals. 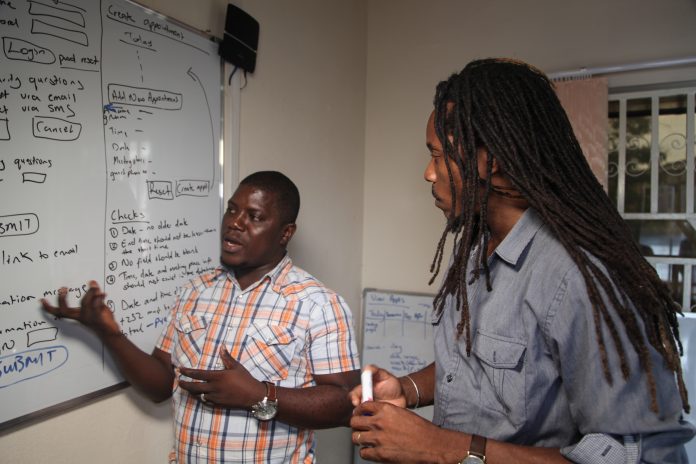 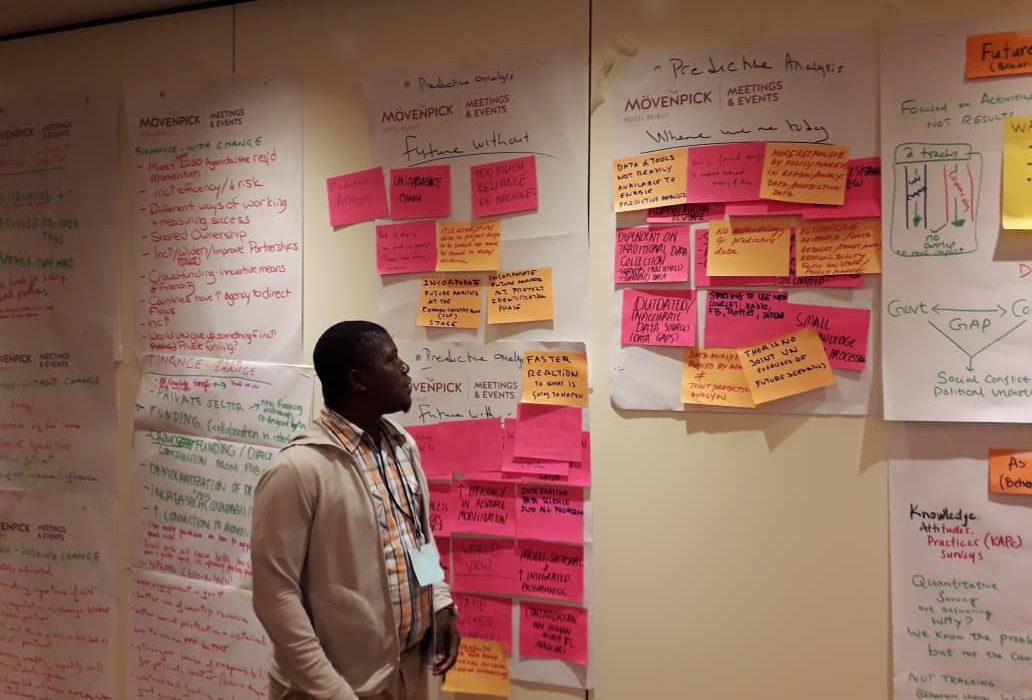 My Experience at 2018 UN Innovation Bootcamp

by dsti
I recently returned from the 2018 UN Innovation Bootcamp which took place from 24-27 July, 2018 in Beirut, Lebanon. The Bootcamp was organized by the UN Development Operations Coordination Office and it brought together cross sectorial teams working in data innovation, collective intelligence, behavioral insight and foresight/futures, and innovative finance from 21 countries. I attended as one of the mentors from Sierra Leone. As a mentor, I was matched with teams to help them think about their project design and implementation at country level. However, I was also an active peer learner and I connected with experts and novices who all had a similar interest in improving lives through data and innovation. This was pretty neat. I also learned about how the United Nation embraces data and innovation in their country operations and explored opportunities of doing more. UNSDG – A brief introduction The United Nations Sustainable Development Group unites 40 UN funds, programmes, specialized agencies, departments, and offices that play a role in development. The UN Development Operations Coordination Office- the secretariat of the UNSDG, supports 131 UN country teams serving 165 countries and territories to work together to increase the impact of the UN system. Several  country teams use innovation in their country programming including human centered design, foresight/alternative futures, big data, real-time monitoring, crowdsourcing, innovation lab/camp, mobile feedback mechanism, micro-narratives, and behavioral insights. Examples of projects by participants at the Bootcamp are: SDGs Real-time monitoring to enhance participatory planning in Colombia-Data Collective intelligence to engage Iraqi youth in mapping their cultural heritage devastated by the war in Iraq Data accountability framework based on collective intelligence in Lesotho Combining UAV and Satellite Imagery for Improved Crop Monitoring in Malawi Using AI to automate the Rapid Integrated Assessment mechanism and to nationalize SDGs in Serbia Block-chain for Public Services (Land Registry) An effective solution to enhanced transparency, accountability, and inclusivity in Uzbekistan I grew significantly through the experience of engaging with participants on a daily basis learning about their projects and actions, sharing cutting-edge innovation practices and the introduction of new skills, tools, and innovative concepts in a peer-learning environment. Upon my return back to the Directorate of Science, Technology and Innovation, I have continued my normal projects and have dug deeper into applied machine learning and technology design as related to the SDGs.
Blog

Transforming Government through Science, Technology, and Innovation in Sierra Leone

by dsti
It is with great pleasure that I share the news that H.E. President Julius Maada Bio has appointed me as the Chief Innovation Officer for the Directorate of Science, Technology and Innovation (DSTI). DSTI is situated within the Office of the President and in my role, I will also serve as an Advisor to both President Bio and the Chief Minister Prof. David Francis. A new body of government, the Directorate of Science, Technology and Innovation (DSTI) has a simple vision: to help transform Sierra Leone into a prosperous nation through science, technology and innovation. The Directorate seeks to facilitate and support a vibrant national innovation and entrepreneurial ecosystem for the public and private sectors of Sierra Leone through: The President’s New Direction Agenda presents a unique opportunity for the growth of Sierra Leone,  and I will invest all my resources, networks and experiences toward ensuring that DSTI supports Sierra Leone to become an innovation nation. We are in it together!
Blog